Metro-Goldwyn-Mayer (MGM) originally announced a remake of the 1925 silent film Ben-Hur in December 1952, ostensibly as a way to spend its Italian assets. Stewart Granger and Robert Taylor were reported to be in the running for the lead. Nine months later, MGM announced it would make the film in CinemaScope, with shooting beginning in 1954. In November 1953, MGM announced it had assigned producer Sam Zimbalist to the picture and hired screenwriter Karl Tunberg to write it. Zimbalist was chosen because he had produced MGM’s Best Picture-nominated Christians-and-lions epic Quo Vadis in 1951. The studio then announced in July 1954 that production would start in March 1955 with 42 speaking parts and 97 sets. MGM said Sidney Franklin would direct, that the script by Tunberg was finished, that shooting would occur in Rome and in Spain, and that Marlon Brando was up for the lead. In September 1955, Zimbalist, who continued to claim that Tunberg’s script was complete, announced that a $7 million, six-to-seven month production would begin in April 1956 in either Israel or Egypt in MGM’s new 65mm widescreen process. MGM, however, suspended production in early 1956.By the late 1950s, court decisions forcing film studios to divest themselves of theater chains and the competitive pressure of television had caused significant financial distress at MGM. In a gamble to save the studio, and inspired by the success of Paramount Pictures' 1956 Biblical epic The Ten Commandments, studio head Joseph Vogel announced in 1957 that MGM would again move forward on a remake of Ben-Hur. Filming started in May 1958 and wrapped in January 1959, and post- production took six months. Although the budget for Ben-Hur was initially $7 million, it was reported to be $10 million by February 1958, reaching $15 million by the time shooting began—making it the costliest film ever produced up to that time. When adjusted for inflation, the budget of Ben Hur was approximately $132 million in constant dollars.One notable change in the film involved the opening titles. Concerned that a roaring Leo the Lion (the MGM mascot) would create the wrong mood for the sensitive and sacred nativity scene, Wyler received permission to replace the traditional logo with one in which Leo the Lion is quiet. It was the first time in MGM history that the lion logo was not seen roaring. 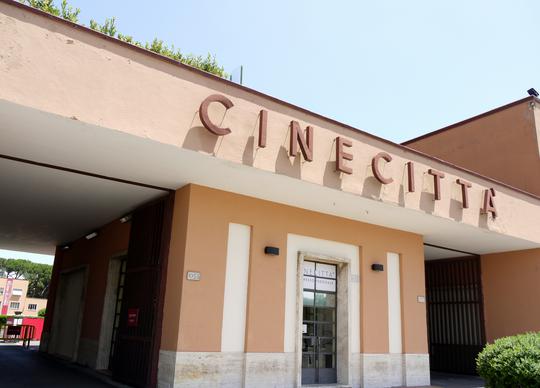