Casu martzu (Sardinian pronunciation: [ˈkazu ˈmaɾtsu]; literally ‘rotten/putrid cheese’), also called casu modde, casu cundídu and casu fràzigu in Sardinian, is a traditional Sardinian sheep milk cheese that contains live insect larvae (maggots). A variation of the cheese, casgiu merzu, is also produced in some Southern Corsican villages.Derived from pecorino, casu martzu goes beyond typical fermentation to a stage of decomposition, brought about by the digestive action of the larvae of the cheese fly of the Piophilidae family. These larvae are deliberately introduced to the cheese, promoting an advanced level of fermentation and breaking down of the cheese’s fats. The texture of the cheese becomes very soft, with some liquid (called làgrima, Sardinian for “teardrop”) seeping out. The larvae themselves appear as translucent white worms, roughly 8 mm (0.3 in) long. 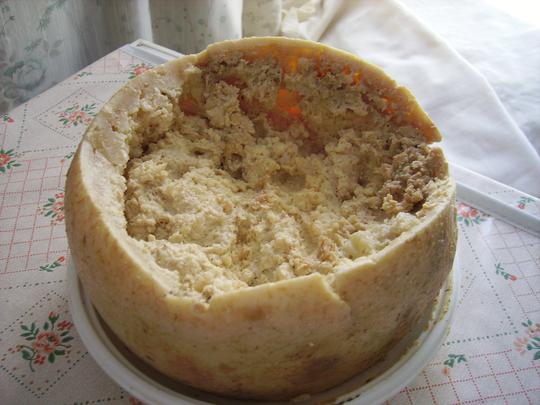